Center for the Tebtunis Papyri : Resources

Advancing our understanding of antiquity through endless inquiry into papyrus texts

When the UC Berkeley share of the finds from the Tebtunis excavations reached the campus, the texts on papyrus were separated from the other objects. The texts were housed in what would later become The Bancroft Library, while the objects went to what is now the Phoebe A. Hearst Museum of Anthropology. Although the physical distance between these buildings is short, the potential for holistic study of these two types of material remains from Tebtunis has been little realized so far. CTP's online exhibits are an effort to bridge an artificial divide, to reunite objects with texts in a virtual environment. 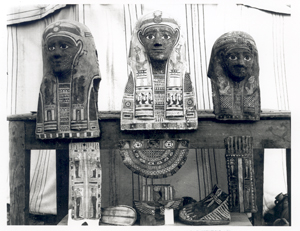 Readers and Writers in Roman Tebtunis

Elisabeth R. O’Connell curated this exhibit to coincide with Ann Ellis Hanson's 2005 public lecture, “Tebtunis: Its Inhabitants and Its Papyri of Medical Content.” Based on literary and documentary texts in Berkeley’s Tebtunis collection, the exhibit investigates the evidence (and limits of the evidence) for literacy in Roman Egypt.

Elisabeth R. O’Connell curated this exhibit to coincide with Willy Clarysse’s public lecture, “The Great Revolt of the Egyptians (205-186 BCE).” It explores the definitions of “Greek,” “Roman,” and “Egyptian” implicit in “Graeco-Roman Egypt” through the lens of archaeological (including papyrological) evidence in Berkeley’s collections.

Religion, Magic, and Medicine in Ptolemaic and Roman Tebtunis

This exhibit is an adaptation of Elisabeth R. O’Connell’s exhibit that complemented Dominic Rathbone’s 2003 public lecture, “A Town Full of Gods: Imagining Religious Experience at Tebtunis.” The exhibit takes Tebtunis as a case study of how religion functioned in Graeco-Roman Egypt and challenges the idea that “religion, magic, and medicine” constituted discrete categories in antiquity.

Elisabeth R. O’Connell (using text from Ancient Lives) created this exhibit, an overview of the Tebtunis papyrus collection and its history, to coincide with Dorothy Thompson’s 2002 public lecture, “Obelisks and Fountains: Greek Culture in Hellenistic Egypt.”

This exhibit adapted by William Short coincided with “The Tebtunis Papyri: The First 100 Years,” a 1999 symposium sponsored by The Bancroft Library and the Department of Classics. An international group of scholars discussed social and administrative history, cultural exchange, and religion as illuminated by the material from Tebtunis.

An index to the more than 4,500 negatives and slides of Greek papyri stored at the Copenhagen branch of the archive of the Association Internationale des Papyrologues. This index is maintained by Adam Bulow-Jacobsen.

This homepage contains information about the American Society of Papyrologists and a list of its publications.

Centre for the Study of Ancient Documents

“The Centre for the Study of Ancient Documents was established in 1995 under the auspices of Oxford University’s Faculty of Literae Humaniores to provide a focus for the study of ancient documents in Oxford. Although the concentration of the Centre's activities is within Oxford, it is hoped that it will develop into a national and international centre that will attract and be of interest to scholars from other institutions. To this end the Centre’s activities and resources are progressively being made publicly available through this WWW site.”

This page provides images of demotic papyri in the Lecce collection and a description of the excavations carried out by a joint expedition of the Universities of Lecce and Bologna at the site of ancient Bakchias, Egypt.

Checklist of Editions of Greek and Latin Papyri, Ostraca and Tablets

The primary purpose of the Checklist of Editions of Greek and Latin Papyri, Ostraca and Tablets is to provide for scholars and librarians a ready bibliography of all monographic volumes, both current and out-of-print, of Greek and Latin texts on papyrus, parchment, ostraca, or wood tablets. This new instance of the Checklist is a work in progress. Most of the data already supersede those of the previous site.

The Duke Databank of Documentary Papyri online allows scholars to search more than 50,000 documentary texts on papyri, ostraca, and tablets.

This database lists more than 26,000 dated papyrus texts, allowing scholars to quickly assess how many documents derive from a given period.

The homepage of the Heidelberg Papyrological Institute offers a brief introduction to the Institute. It mentions ongoing research and provides a description of library resources.

Description of a project to make digital images of carbonized and other hard-to-read papyri, with examples of some of the results.

The homepage of the Department of Ancient History of the Catholic University of Leuven provides information about the Prosopographia Ptolemaica and several projects undertaken by Leuven faculty and doctoral students. One highlight is a database of proper names in late pharaonic, Graeco-Roman, and Byzantine Egypt.

The Papyrology homepage of the University of Michigan presents an introduction to the collection and a description of the Papyrus Digitization Project (with digital images).

The homepage of the Department of Papyrology, Epigraphy and Numismatics includes a staff list, a description of the series Papyrologica Coloniensia, and an introduction to some papyrus texts in Cologne, with images.

The Papyrus Carlsberg Collection was founded in the 1930s by Prof. H. O. Lange through funds provided by the Carlsberg Foundation. The main purchases were made between 1931 and 1938, and in 1939 the Carlsberg Foundation presented the collection to the Egyptological Institute at the University of Copenhagen with the consent of the headmaster of the university and the Ministry of Education. Since then it has been located in the Egyptological department, which is now part of the Carsten Niebuhr Department at the Institute of Cross-Cultural and Regional Studies. In 1954, Aksel Volten, keeper of the collection since 1943, was able to enlarge it substantially through new acquisitions, again with funds provided by the Carlsberg Foundation.

An interdisciplinary portal of papyrological and epigraphical resources dealing with Egypt and the Nile valley between roughly 800 BC and AD 800 currently expanding its geographical scope to the Ancient World in general. Trismegistos is arguably one of the most important databases for papyrological research but is currently in danger of closing due to lack of funds. If you are able, please consider donating.

The homepage of the Yale Papyrus Collection at the Beinecke Rare Book and Manuscript Library provides a thorough introduction to the Yale collection and a searchable database of Yale’s catalogued papyri. The database includes scanned images of many of the papyri. Yale recently introduced a new internal finding aid, FindIt, that works in parallel to the above link but often has more recent images and bibliography listed. Consider using Yale FindIt as well.

This site provides subscription and submission information for the ZPE journal, as well as article indices (PDF).