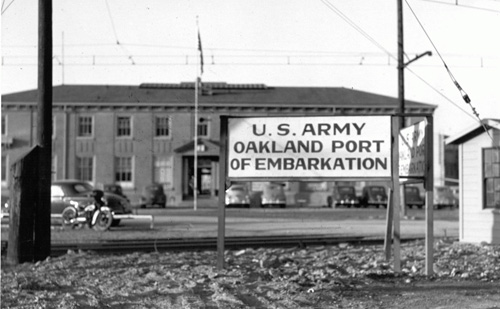 The OAB was recommended for closure by the Base Realignment and Closure Commission in 1995 and finally shut its doors in September 1999. Ownership of the base was transferred to the City of Oakland (City) and to the Port of Oakland (Port) in 2006. Parts of the OAB were determined eligible for listing in the National Register of Historic Places (NRHP) as a discontiguous historic district. Redevelopment of the OAB by the City and the Port would remove all resources contributing to the OAB Historic District rendering it no longer eligible for the NRHP. The loss of the OAB Historic District was determined a significant impact by the Oakland Army Base Area Redevelopment Plan Environmental Impact Report (EIR), which identified mitigation measures to partially compensate for the loss. The Oakland Army Base Oral History Project implements recommended cultural resources mitigation measures from the Final EIR. The City and the Port jointly fund this project.

This oral history project on the OAB is intended, first and foremost, to capture living memories of a now closed institution. Beyond the basic act of recovering memories, however, the project seeks to gain information about: the core functions of the base as part of the Port of Embarkation, as headquarters for the Military Traffic Management Command, Western Area, and as a key element of the Port of Oakland, one of the largest deep-water ports in the United States; the social, cultural, and military life on the base as it relates to a wide variety of issues including labor, housing, politics, public order, and the environment; and the relationship between the OAB and the surrounding world, from immediate community of West Oakland to the City and Port of Oakland to the rest of the world.

The OAB Oral History Project is designed to last three years. During the first two years of the project, approximately 45 interviews shall be conducted on the topics mentioned above with veterans, former base employees, community members, and policy makers. The interviews are transcribed, reviewed by the interviewees, and then posted on this website (the Regional Oral History Office is in compliance with the UC Berkeley Committee for the Protection of Human Subjects.) The final year of the project will be devoted to creating a book about the OAB based primarily upon the oral history interviews.

Funding
The Oakland Army Base Oral history project is funded through a contract with the Port of Oakland and the City of Oakland for the duration of three years.

Statement of Scholarly Independence
Although funded by the Port of Oakland and the City of Oakland, this project was planned and is being executed as an independent scholarly research project; individual interviewees are covered by UC Berkeley Committee for the Protection of Human Subjects guidelines that provide for sealing portions of interview transcripts at the discretion of the interviewee. While the research design and interviewing are independent of the Port and the City, we have been assisted by staff at both institutions in identifying research themes and in selecting and locating potential interviewees. 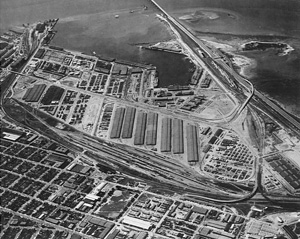 We propose to select interviewees and conduct interviews with an eye to addressing three overarching themes, each of which contain a number of research questions and subthemes:

To your reserve your copy of the Oakland Army Base book, please send your name, address, email, and phone number to Paul Burnett with ‘OAB Book’ in the subject line.

Historical overview of the Oakland Army Base